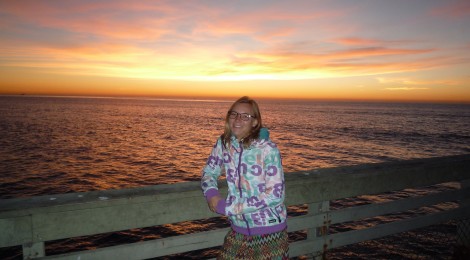 About a week ago I left the United States of America after spending about 2 months there. I already told you about my first month in LA and on Hawaii, but you’re still missing Month 2, so here it finally comes.

I started it off with the visit of a good friend of mine from Germany, renting out a colorful camper van and cruising through LA and down the Californian coast all the way south to Oceanside. Unfortunately the weather wasn’t as good as hoped for, so staying in our camper during the nights was pretty cold, but we survived, covering ourselves in blankets and turning on the motor in the morning to heat up the camper. Then we would drive to a parking lot at the beach and have breakfast right there – luckily most mornings we could sit outside and enjoy the sun and warm up again! We spent some days in the area around Venice Beach and Santa Monica, then we met up with my good friend Yvette from LA and drove down to Huntington Beach all together. At the Huntington Pier we saw a beautiful sunset with some old ballads playing in the background, then we had really yummy burgers and a peanut butter shake in the cute diner at the end of the pier.
After Huntington we drove along the coastal towns of San Clemente, Carlsbad and Encinitas. Unfortunately it was really cold, rainy and cloudy so we didn’t get to stay at the beach much and see many surfers (or even any good surf for that matter). However, it was a nice drive along the coast and we enjoyed it despite the grey weather! And in Oceanside the weather didn’t matter anymore at all, as we were invited to stay with one of Yvette’s closest friends and her family for dinner. They all treated us like we were age-old friends and it was amazing to experience their Mexican hospitality! I had never before been welcomed to a stranger’s home with so much warmth and openness – it was simply unbelievable! When they insisted that we spend the night inside their home, I was overwhelmed – and very grateful as it was really cold that night and in between the rain it even started hailing… I will never forget this night and the interesting discussions we had.
After this amazing day it was already time again to say goodbye to my two girls – one having to go back to work, the other going back to Germany. And I was going further down all the way to San Diego.

There I was lucky again, as I was invited to stay with a friend that I had only met on Oahu a couple of weeks earlier. He saved me from having to spend my time in San Diego in a shitty hostel – probably one of the shittiest hostels that I have ever stayed in – and he took me to a country music club and my first (and only) line dancing lesson (I sucked, but if was a lot of fun!), introduced me to American Football (really complicated rules, but once you get it really cool!) and went surfing with me (early in the morning and in cold water, but with some fun and some scary and sketchy waves but one of the best rides of my life!)!
All in all I stayed two weeks in Ocean Beach, San Diego and made some day trips into the city, to Little Italy (which is supposedly the most successful Little Italy of the whole US), SD Downtown (quite small) and the Gaslamp Quarter (really nice with loads of cute old buildings and bars, certainly a great spot to go out at night!).
I also spent a day in Balboa Park, a huge park areal built for the World Exposition in the early 1900s with many museums and Spanish-style buildings. Some days I would simply spend at the beach, walk the pier, bike to Mission and Pacific Beach or plan my further travels. I also biked all the way to La Jolla, and watched some guys surf some of the breaks there as well as seals swim and chill along the shore…
On my last day in OB (how the people from a Ocean Beach call their little funky Hippie town with a Peace-sign in their city’s Christmas tree and every third guy telling me that he loved my colorful pants) I went to fulfill my quest of learning how to shape a surfboard -I took a group class with the Shaper Studios in North Park, San Diego, and it was absolutely amazing!!!
I was (of course) the only girl, but the guys were really cool and it was a lot of fun. One of the, decided to keep the board we would be shaping, so he decide the size, shape and thickness of the board. I will do a separate post on the shaping class, as it would be too much to explain everything now, but let me tell you one thing: after 4 hours, between the five students and the instructor, we had shaped a really nice board! (And I was a little bit sad that it wasn’t gonna be mine but I had still too many flights to catch to already buy my own board.)

In my next post I will tell you about my last 10 days in California, which I spent traveling from San Francisco all along the Pacific Highway down to LA and San Diego, as well as my second time on Oahu – and it will not take me another month to do so!

← The Big Island of Hawaii
3 days in San Francisco →