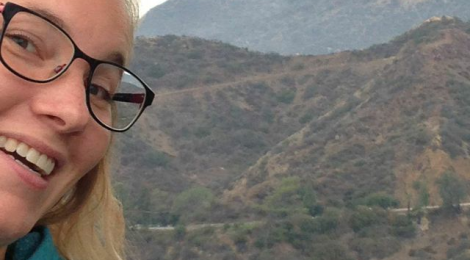 The City of Angels

Welcome to Los Angeles – the city of car driving. At least that was my impression after the couple of days that I spent there. I had never expected it to be so spread out and it felt like we could be driving for hours and still be in the area of LA. But that’s not to say that I only spent time in the car and didn’t get to see amazing things! In fact I did all the time!

When Yvette and Alex picked me up from the airport, we headed straight to Venice Beach, this famous strip of crazy. It was busy with all kind of people – skaters, artists, surfers, tourists, vendors of all kind of stuff. We walked to the skate park to see some kids do their thing and to the famous Muscle Beach – the open air body building arena where guys on steroids would train and showff their muscles. Standing there we bumped into a radio crew that were doing a “guess my name” game and I got my 3 second radio fame right off the plane – of course the guy didn’t guess my name right and I can’t even remember what he guessed…

After a stroll along Venice Beach we drove to Manhattan Beach – a completely different neighborhood with clean modern beach houses right at the beach walk. From there we drove to Silverlake, a neighborhood which once was mainly inhabited by the poorer Hispanics but after the crisis became a hotspot for hipsters due to it’s vintage cafes and thrift stores. It felt like a really cool place to roam but it was getting dark already so we headed to Yvette’s place. On our way we happened to run across a Mexican family which was selling really yummy tacos out of their garage – playing Mexican music and with the perfect view above downtown LA! Sometimes you’re just lucky enough to be in the right place at the right time!

Saturday we rented a car and had a quick look around Santa Monica, which was really busy. We headed back home and on to Huntington Beach where Alex got into the water and had a nice surf session before he left to Canada the next morning. I got to walk along the Surfers’ Walk of Fame in Huntington Beach and we strolled around until we found Kelly’s star – let’s hope he wins his 12th title this year!!!

Saturday night we celebrated the birthday of Yvette’s sister in a bar in Hollywood and drove along the Walk of Fame, but I honestly didn’t see the point of walking along a street which only is famous for the fact that there are stars with celebrities’ names and hand prints on the ground. But hey, people have different priorities and I bet for film lovers this is a pretty big thing 😉

Sunday was a relaxed day as we headed out of the city to the countryside where Yvette met two of her closest friends for a day of wine tasting. It was great to spend the day with Yvette’s friends as they were really welcoming and fun and I didn’t feel like a tourist or outsider at all!

On Monday, Yvette and I explored Downtown LA with its modern highrises, “old historical” hotels and theaters and an amazing book store. It was located in an old building with an atrium, filled with art centered around books and I wish I had taken my camera with me as it was such a great place! Some books were sorted by genre, others by their color, some were too old to be re-sold, so they were used to build an arched tunnel inside the rooms…

After roaming the streets of Downtown LA we headed to the Griffith Observatory and watched the sun set behind the famous Hollywood sign and over the City of Angels. A worthy end to my first visit to LA, as on Tuesday morning I had to bide farewell to the city and Yvette to head off to my next adventure – Hawaii!!!

← catching up II – my trip to the Tortuguero National Park
Kauai →