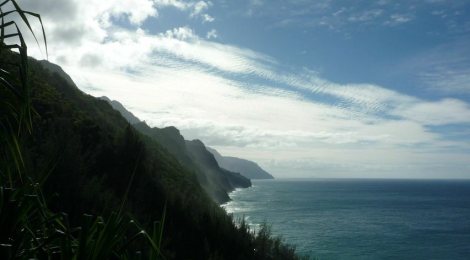 My time in LA ended with a great last Mexican breakfast with Yvette, pouring rain and soaked feet, so that I travelled on socks until I landed in Honolulu, Oahu. Here I should have had enough time to transfer to my onward flight to Kauai – IF my plane had not been late, IF my bag hadn’t been one of the last ones to appear on the belt and IF the shuttle running between the different terminals actually would have run. As all of these IFs happened, however, I was almost 100% bound to miss my flight to Kauai – with only 30 minutes left until boarding and still on the wrong terminal I had to grab my bags and run. Luckily I made it to the check-in on time and was quickly processed through security. After a quick stop in the restrooms I pretty much jumped on the plane and made it to Kauai with all my belongings and by this time no longer wet but hot feet!

Once at the Lihue airport of Kauai, I was actually too late for the airport shuttle to the other bus that would bring me to my hostel in Kapaa, so I caught a cab and caught up with the bus a little way down the road! After a long day of traveling and catching up with my transportation, I pretty much dropped dead in my hostel.

My first day on Kauai started with an overcast sky and although the hostel was right on shore, it didn’t look at all like the Hawaii you would expect from postcards. However, I walked along the beach walk and into the nice little village of Kapaa, where I had a nice breakfast and ran into a local guy with his little kid. We started chatting and Judah gave me some valuable pointers as what to do around the island. I rented a bike, took it along the bike path to the northern beach of Kealia where I watched some locals surf choppy conditions as well as to Waipouli, the southern end of the bike path with swings along the rocky shore, lined with coconut palms.

On the second day I started quite early and took my bike on a bus ride up north to Hanalei Beach, a beautiful white sand beach in a half moon shape with turquoise waters and a striking landscape as backdrop: lush green rigged mountains rising high up into the sky and making you feel like in Jurassic Park (which was actually filmed on Kauai)!

Later I met up with two friends I had met in the hostel the night before and we drove past some scenic beaches all the way to the Haena Beach Park, from where we hiked the Kalalau trail along the Napali Coast. This trail is definitely nothing for people with sandals or unsteady footing, as it’s sometimes more of a climb along slippery rocks, but it’s definitely worth the effort. The views over the ocean and along the Napali Coast are breathtaking and the scent of flowers and fruits that lingers in the air is indescribable! Unfortunately, we had started the hike too late to go far, but even the first hour was already an amazing experience and I am happy I got to see and smell the trail!

Before we headed back to the hostel we explored the Maniniholo Dry Cave, a very deep and broad cave that must have been washed out of the lava rock by waves crushing onto the shore thousands of years ago. On our way back we stopped at Tunnels, the beach where Bethany Hamilton, a local surfer girl, lost her arm in a shark attack. She is a very inspiring person, as she was back on the board 28 days after the incident and until now surfs with the best surfers of the world in the heaviest waves of the world! (I actually got to see her surf Pipeline a few days later and it’s really impressive! Her story is told in the movie “Soul Surfer” if you are interested.)

My last day on Kauai I spent kayaking the Wailua River and hiking to a secret waterfall with Judah, the guy I had run into the first day and who was working as a guide with the kayaking company. It was a great experience as we were a very small group of only four people: a couple from Washington, Judah and me. We were the first kayaks on the river, which meant we seemed to be the only people on earth, exploring this ancient river with lush green everywhere, volcanic mountains above us and flowers floating in the water around us. After about an hour of paddling into the wild, we disembarked our kayaks and went on a hike into the rainforest to get to the secret waterfall. The hike was slippery but offered beautiful views and we came across ancient Hawaiian plantation grounds and sacred spots as well as a lot of Hawaiian roosters! They seem to be everywhere – more so on Kauai than on any other Hawaiian island as they lack natural predators there. The only danger to them are the Hawaiian people who seem to like chicken a lot.
After about an hour of hiking and some raindrops filtering through the dense roof of leaves, we finally reached the waterfall with a beautiful rock pool. We did not jump into it, but made our way slowly into the icy pool and towards behind the waterfall. Standing behind the masses of fresh water falling down into the pool was literally breathtaking and worth freezing. We kept swimming in the rock pool until my teeth started shattering and other groups arrived at the waterfall. After a little snack of dried fruits and biscuits we headed back through the rainforest and came across a wild passion fruit, which we shared amongst the 4 of us. My shoes, once bright pink and orange were covered in mud, as it started raining and the trail had turned into one muddy slope, but luckily I could rinse them off once we got back to the kayaks. During our paddling back the rain kept on coming, but since the air was warm and we 4 were chatting about this and that, it didn’t really matter (apart from my glasses being not really helpful with all the raindrops on them).

On my bike ride back to the hostel I took the bike path along the shore and crossed a bridge, where I saw two people from the monk seal protection watch sit at the river shore. Looking more closely I saw they were watching a monk seal that had moved up the river and was obviously chilling there in the calmer waters. Monk seals are endangered and I was excited to actually see one, so I rode up to the other bridge and was there just in time to see it swim under the bridge and vanish from sight. It was probably about 2,5 meters long and pretty fat, and quite a goodbye present from Kauai right before I left to Oahu!

← The City of Angels
Oahu →