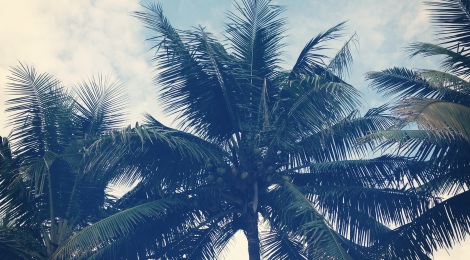 I already have to think hard to know which day it is. The last couple of days seem to fly by and I already feel at home though there is still so much to discover. I’ve already had one of the national dishes, “gallo pinto con pollo” (rice with black beans and chicken) and even though it might sound not so tasty, it actually tastes good as it is made with a lot of spices.
Yesterday I went on a bike ride to Mar Azul with Lindsey and Gabe, a British couple, and we had a great time exploring the small seawater ponds in the rocky coast. We saw hermit crabs, which live in snail houses and run around with them on their back, just to hide in there when they sense danger. We saw small anemones which would close when pinched with a stick and others that would change their color from turquoise to light green.
We found lots of coconuts lying around and I actually got one open, only to realize it was not good to eat and had lost all the coconut water during the opening procedure (hitting it hard on a pointy rock and then prying it open with my bare hands). However, it was a really fun exploration and the landscape is really amazing!
The surfing is also really nice – the first day it was quite choppy and reminded me a lot of Cofete on a bad day, wth strong currents and a heavy impact zone hard to get through, so I only played around in the white water and got a feeling for the place and the board. Today, however, it was a different beach, with clear lines, softly spilling waves and a glassy surface. Perfect waves to go out and try to catch a few without having to worry too much about getting smashed, so even though I only got one (as they actually were really soft waves and my paddling has to improve a lot to catch them) I’m happy and confident I will catch a lot of waves here.